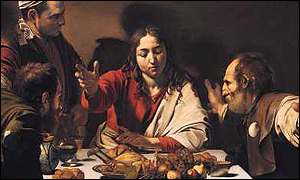 Without a beard, Caravaggio's Christ is not readily recognisable
Light-brown, shoulder-length hair. A slim, bearded and, above all, white face. Everyone is familiar with the features of Jesus Christ. But a new BBC programme questions this image of the Son of God.

If the bulk of Western art is to be believed, the harsh sun of the Middle East did nothing to colour the skin of Jesus Christ.

But the delicate, perhaps even equine, porcelain features of the Christ imagined by the likes of Caravaggio, El Greco and Rembrandt have little in common with the latest impression of what Jesus really looked like.

The makers of BBC One's upcoming Son of God series have employed modern forensic techniques to create a model of Christ's face based on the skull of a 1st century Jewish man.

The model's somewhat muscular features have a heartening "bloke down the pub" feel. Full cheeks and a sturdy nose are in marked opposition to the decidedly feminine bone structure of Jesus as depicted since before the Renaissance.

And the skin colour of this "new" Christ? Experts have decided Jesus would have been anything but pearly white. The model has a dark colouring, more realistically suited to desert climes.

The traditional image of Christ is perhaps the most recognisable face on the planet. And even as interest in Christianity wanes in the UK, we are still fascinated by the face of the Messiah.

Seeing Salvation: The Image of Christ, at London's National Gallery, was the UK's most visited art exhibition and the fourth most popular show in the world last year.

The 70 portraits of Christ in the show - just a fraction of the national collection's array of such works - hinted at the uniformity of how Jesus was given human form.

Even the lowliest members of medieval European society would have been confident that they knew what Christ looked like.

Images of his face were everywhere, in churches, homes, and on portable altarpieces belonging to rich merchants and diplomats.

Relatively cheap woodcut prints of scenes from the life of Christ even put the image of Jesus within reach of the poorer classes.

But where did this conception of Christ come from? Nowhere in the Bible are we offered a physical description of Jesus. Indeed, the Old Testament makes it quite explicit that God looks most unfavourably on "graven images".

Early Christians contented themselves with symbols to represent their Messiah, such as the fish and the perhaps more potent Cross.

It has been argued that as Christianity spread it adopted some of the pagan taste for idols. It is also believed that one agreed physical appearance for Christ strengthened the argument against those who denied Jesus had ever taken on human form at all.

For inspiration, religious artists looked to "miraculous" likenesses of Christ. The Turin Shroud (said to have been used in Christ's burial) is the most famous relic bearing his features, but it is not the only one.

The Veil of Veronica was a cloth said to have been held out to Jesus, and to have taken his image, as he was led to his crucifixion at Calvary. Despite being lost in the 1500s, it still informs our ideas of what Jesus actually looked like.

Paintings based on such "true likenesses" of Christ received a boost when worshipers were told in the Middle Ages they could knock up to 10,000 years off their time in purgatory by praying in front them.

That people in Western Europe were so ready to believe their God was fair-skinned is perhaps of little surprise, especially given the cultural baggage of the Crusades, in which non-whites were seen as non-believers.

The colour white is also closely identified as a sign of purity. Indeed, the fluffy white lamb (as brought to the manger by the shepherds) has often been used as a symbol of Christ's spiritual purity.

However, the BBC's Son of God model is not the first to question the whiteness of Jesus.

But Mr Giuliani did not object to Renee Cox's Yo Mama's Last Supper on the grounds of Christ's skin colour. He was less than impressed that Cox herself posed naked as the Messiah.

"Why can't a woman be Christ? We are the givers of life," said Cox.